Resilience and agility are characteristics that enable businesses to overcome difficulties and pivot to reach targets in times of adversity. Skills also necessary when marketing through the coronavirus pandemic.

Key West are a long-established, Yorkshire-based Pest Control company, whose crucial services work to protect public health and commercial businesses. Tantamount to the fifth UK emergency service, they are also the solution to the pest-related adversities experienced by suffering homeowners and tenants all over the UK.

In 2019 and the first few months of 2020, Key West experienced a period of considerable growth, expanding their team of Office Staff and Pest Technicians, and hiring Hygiene Specialists for the newly established Hygiene Services arm of their business.

The Marketing Optimist have helped Key West across their entire Marketing and Digital mix. 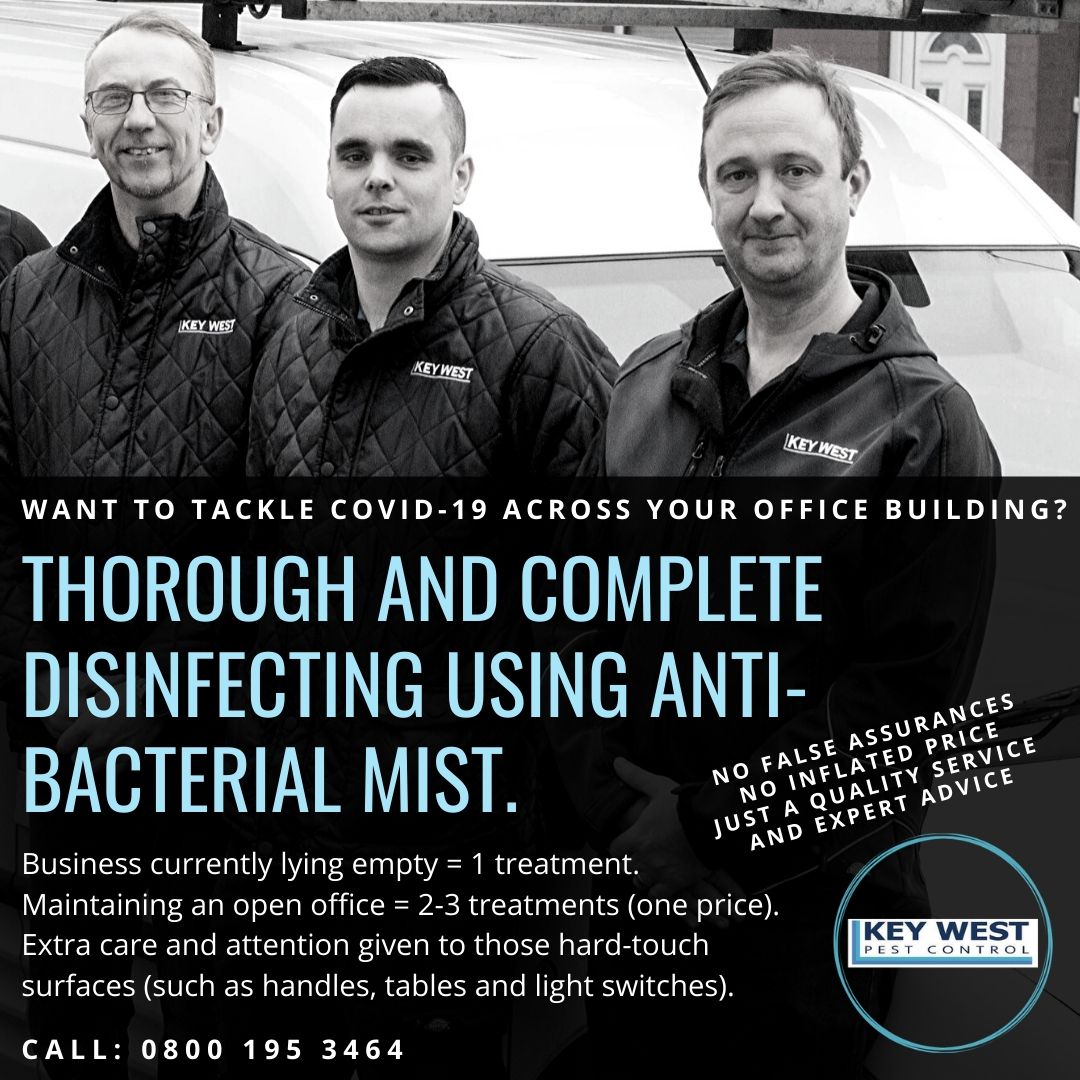 On March 23rd 2020, the UK PM put national Coronavirus guidelines in place, ordering the population to “stay at home”, providing a list of essential industries that would be permitted to continue to function as normal.

Pest Control, despite its fundamental importance in safeguarding public health, was not included in this list, meaning Key West joined the thousands of UK businesses experiencing a significant disruption to their operations.

Struggling to access the premises of their commercial clients and with guidance forcing them to only accept residential call outs to treat the highest-level infestations, Key West’s Hygiene Services team sourced an Antibacterial Mist treatment able to defend against the virus on hard surfaces across commercial spaces.

We sought to position Key West as knowledge leaders within the area of navigating coronavirus across Pest Control and Hygiene Services industries.

Utilising video marketing, social media marketing, outreach/lobbying techniques, PR, and website development abilities, we set out to establish them as a vocal force in the lobbying for Key Worker Status.

Marketing their Antibacterial Mist Treatment in order to generate conversions/sales, and exposing the covid-19 related changes/additions to their services, we also distributed their helpful videos and tips for residential callers battling low-risk pest-problems throughout lockdown. 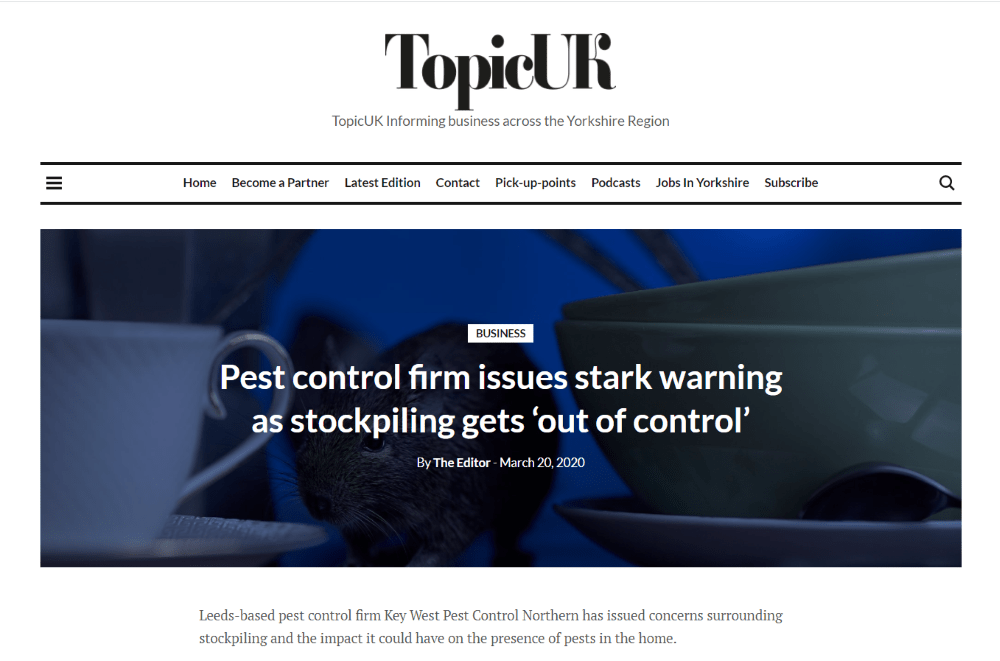 After putting a new strategy in place, The Marketing Optimist began by carefully crafting Key West’s messaging surrounding the additional services they could provide to keep the public safe, without opening up their properties to Key West.

Scheduled across their social media channels, our messaging also included the precautions Key West were taking, both in their screening process to gauge the severity of the caller’s infestation, and if the infestation was considered high-risk, the measures they were taking when entering properties.

We ensured these posts highlighted Key West’s use of extensive PPE, commitment to social distancing guidance, and raised awareness that they were still operating (providing restricted services with a skeleton crew), whilst keeping the customer’s safety at the centre of every decision made.

Making the decision to use dramatic imagery, of old or vulnerable people in their homes, we targeted these posts with the use of coronavirus-related hashtags, as well as those relating to residential pest control.

These posts received an unanimously positive response and resulted in continued “essential” residential callouts. Comments beneath these posts praised Key West’s commitment to public health and expressed surprise that the Pest Control industry had not been granted Key Worker Status.

This messaging ran alongside posts which detailed Key West’s Antibacterial Mist treatment, highlighting the benefits to organisations, and outlining the antimicrobial agent present in the treatment able to produce the results. Regarding corresponding content, we used images depicting a wide range of commercial environments, from office-spaces to warehouses, and a series of infographics we produced.

This messaging generated enquiries via the social media comments, and conversions via direct communication with Key West.

These posts linked to a new website page we developed for Key West which included important information they wished to impart on the public while non-essential call outs (for small-scale, low-risk infestations) were not possible.

We took the pest prevention, diagnosis and identification tips we’d crafted for this page, along with advice to avoid an infestation of stored product insects, and broke them down into further social media messaging, to spread this helpful advice to the public at large. A Key West Pest Technician produced a number of videos to accompany our social media marketing, detailing further tips for the public in the first, and demonstrating how to make a home-made insect-detector in the second.

Alarmed by the news of the nation stockpiling food, and with more and more callers describing small-scale, low-risk infestations of stored product insects, we ran a local PR campaign for Key West regarding the dangers of stockpiling. This also detailed the situation the outbreak had placed them in, and their desire to be out protecting the public.

We were then able to share this coverage, and schedule further social media posts regarding how to avoid attracting pests to food stores, with the “how to make a home-made insect detector” video to accompany.

Key West informed us that the BPCA (the industry’s governing board) had sent a letter to the UK government imploring that Pest Controllers across the UK, like those in Ireland and Europe, be granted Key Worker Status. Key West had also written to their local MP independently, but neither they or the BPCA had received a response.

The Marketing Optimist got to work putting together a press release for national press on Key West’s behalf, and expanding on the points raised in the BPCA’s letter to government regarding the enormous benefits of granting the industry Key Worker Status. 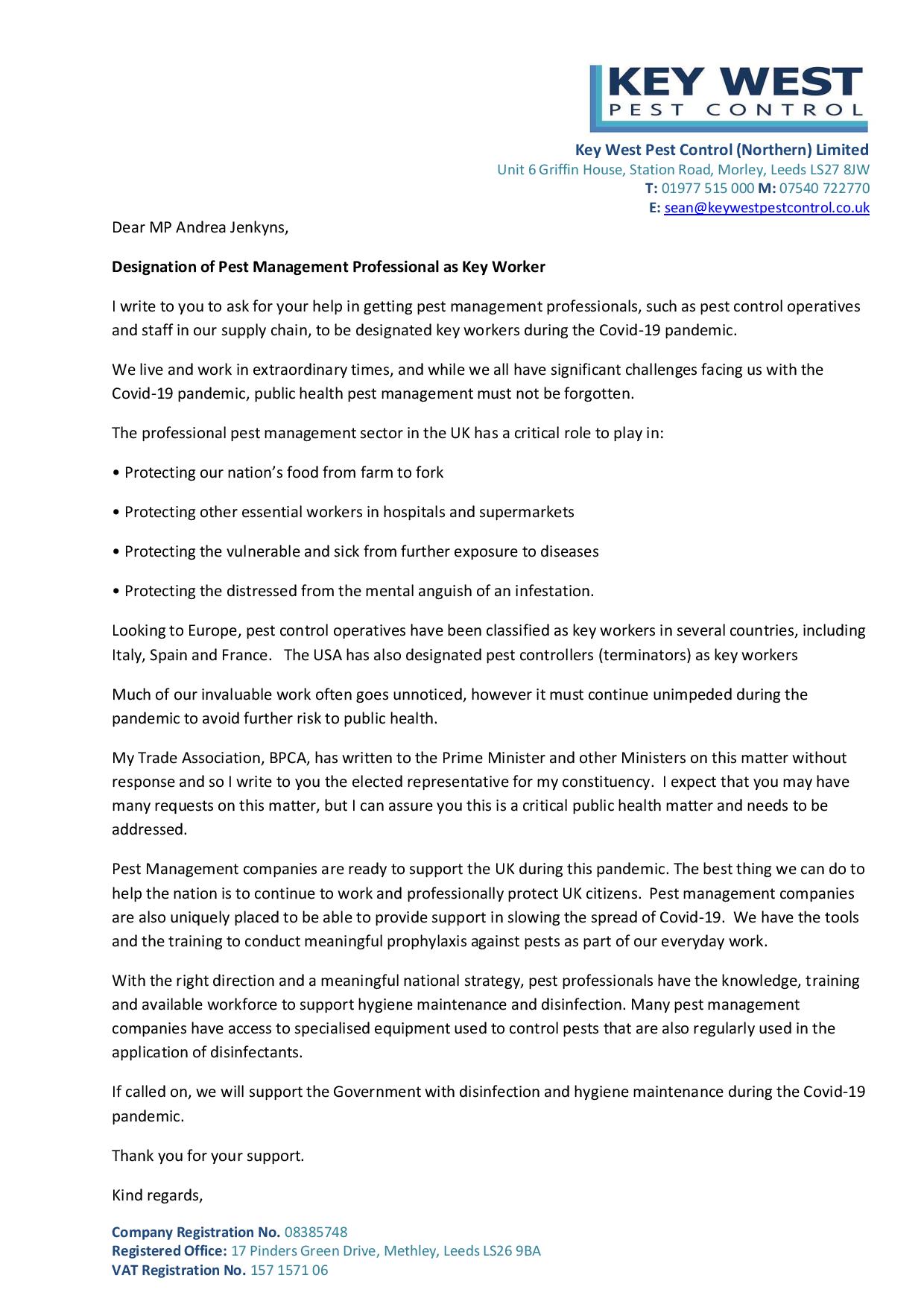 Taking a lobbying approach to our messaging within the social media marketing we deployed to generate change for Key West, and to create some engagement in their plea for Key Worker Status, we addressed some posts directly to local MP’s and members of council, tagging them in, as well as the UK Government and Parliamentary accounts.

These posts were accompanied by a video from Key West founder Sean Mclean, with his personal request for action, that those in government enable Key West to help the public, our essential workers, and our working environments.

Compiling a message and including the link to the petition, we sent this message to hundreds of Pest Professionals and Facilities Managers asking them to sign.

With continuous marketing of the client’s Antibacterial Mist Treatments, creating a website page for their Covid-19 related Hygiene Services, which we exposed via social media marketing, alongside video content of the treatment being performed, conversions began to climb.

Key West were able to ‘unfurlough’ their staff and resume full operations, throughout the national lockdown measures that were still firmly in place.